Raxeira's
How do you think of your dog? How do your thoughts about your dog affect your reality and everyday life together? I’ve been thinking a lot about this from time to time and specially when there is stuff happening in my own life with the dogs or when I come across discussions regarding dogs and dog training. I reflect a lot about what other people call their dogs, how they talk and write about them, how I talk about them myself and above all I reflect a lot upon the way I think of my dogs. How I look at them and the things they do. I’ve realised that I do the same thing when it comes to people too. I put a lot of effort and thought in how I see other living beings (believe me, I don’t always succeed) and until the day I’m proven completely wrong, I always try to see the good in others. Sometimes, this seems to be the hardest thing ever.

So, why do I do this, you ask? Because I honestly believe that it affects how we see and experience each other. I strongly believe that it will make me handle difficult situations better, that it will help me be more fair, more understanding, more considerate and feel better about other individuals if I always try to see the good in them. Ok, I get that this may sound kind of vague or fuzzy, but let me explain by giving you an example from a situation we had last night:

Eldar had a bad night. He was irascible, grumpy and behaving pretty much like a three-year-old kid can do when unhappy with life, for whatever reason. Eldar, when he’s in that mood, kind of turns into Gollum (in lack of a better way of explaining it). He was sneaking around all evening, collecting scrapings from old chewing bones that he and/or Smella had hidden outdoors, took them inside and hid them again under his blanket (this we discovered later) and then he laid there on top of it all, staring suspiciously on the rest of us. Despite the fact that no human or dog in the house was remotely interested in stealing it from him. Now, I don’t really have a rule against the dogs hiding their bones – or toys – outdoors, usually this never leads to problems around here, but all the same, I still make a habit of picking up the hidden things I find around the yard (especially bones). You know, just in terms of prevention. Obviously, I don’t always see or find everything they hide out there; Eldar especially has a talent when it comes to hiding and camouflaging his little treasures in the most odd ways. He’s smart like that.
Anyways.. Later that evening Eldar was finally starting to ease up a little, letting go of his suspicion and after a while left his blanket. We start playing around with some tricks and Eldar is just performing a trick that he still finds kind of scary (he has a bit to work on when it comes to his balance and body control) – in the middle of this Smella, who had been with Erik, comes running right into us both, there’s a slight miscommunication between the dogs and before I know it they’ve gotten into a fight. In these kind of situations I often react instinctively; I get right in between the two and I pretty much grab Eldar and lift him away from Smella. Now, this is all happening so fast I barely know what happened, but I think Erik might have grabbed Smella too. Either way, I take Eldar and sit down with him to calm him down and in a few second everything is under control again and dogs are fine.
Later, when I’m brushing my teeth before going to bed, I suddenly realise that I’ve been quite chewed on during the chaotic little situation we had had and probably when I grabbed Eldar and he instinctively reacted with trying to fence me off. I obviously hadn’t felt him chewing on me while it all happened – adrenaline I’m guessing – but I notice my forearm being oddly swollen and quite sore. I realise this will turn into a big, nice bruise in time.

Ok – NOW – this is where I get to the point:
This is where I come to what I’d like to think of as a crossroad – consciously or subconsciously – when it comes to my way of tackling what has just happened and all of the emotions that automatically starts welling up. This is where I make a choice to think “that stupid piece of s**t – it freaking bit me!” to then go yell/lecture the dog – or think “oops, how unfortunate that he didn’t keep track of his own teeth and that I happened to be in the firing zone – and wow, his stress levels must’ve been super high and somehow I completely failed to see it” and then I’ll analyse what happened, why it happened at all and how to prevent such a thing from happening again. I have a choice to look at my dog as a stupid, mean piece of trash – or I can choose to look at my dog as a wonderful living being who simply had a difficult time handling his own emotions in a weak moment. Now THIS makes all the difference to the way I am and act towards and around my dogs. And surely it makes a difference in how they act around and feel about me too. To be perfectly frank with you – of course there are days when I completely loose my temper – when I’m having a weak moment and cannot find a way to handle the stress – and sure there are times when I’ve raised my voice, yanked the leash harder than I’ve intended when letting my frustrations get an outlet during these past two (almost) years and yes, I’ve occasionally taken a hold of the scruff when I was really scared.

But what I genuinely try my very hardest NOT to do is to think of my dog as stupid or mean or as someone who’s looking to cause hurt or messing with me just for the sake of it. This, because I strongly and genuinely believe that the day I let thoughts like that take any place whatsoever in my head and my body – that’s a day when the risk is hugely increased of me acting along with them negative feelings towards my dogs. The thing is, in this relationship it is actually MY place to be the mature one, it’s on ME to be the responsible one, the one to turn the other cheek, the one to be reliable and I am the one supposed to provide safety and security for my dogs. As it is the responsibility of parents to be and do the same for their child who has just thrown a fit and hit his mom.

There is a HUGE – and in my opinion very important – difference between yelling to your child:
“What a little, mean brat you are – you are being such an idiot!” and calmly explain “I can see that you are upset, but what you just did actually hurts and it’s not okey to hit people”. And if you ask me, this difference is just as important in relation to my dogs. 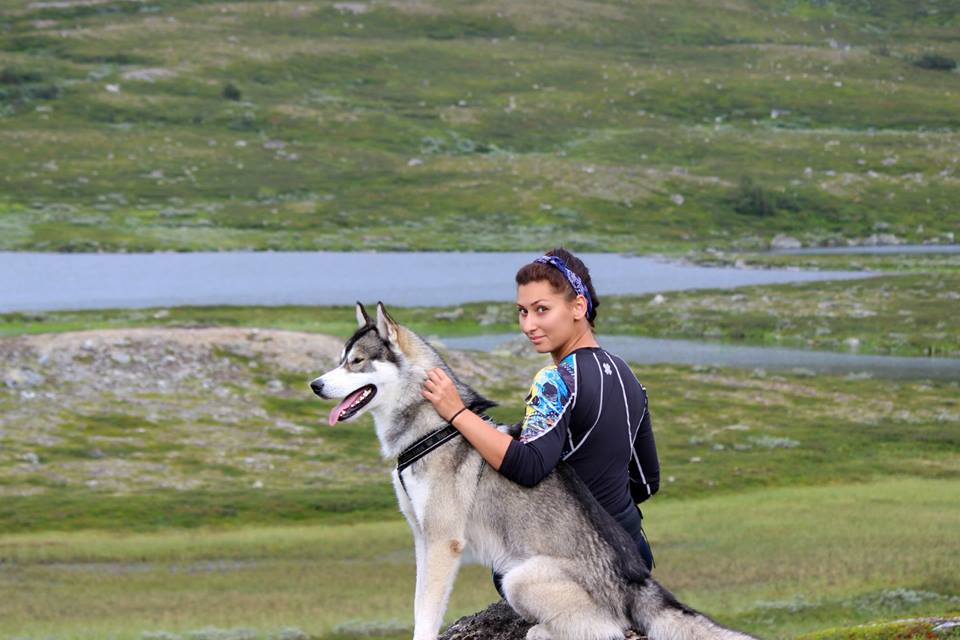 Eldar had just thrown a massive fit over me not letting him go chasing after reindeers – I believe you can still see tracks in his face of the stress he was under even when this shot was taken. Instead of fighting and yelling at him (which doesn’t make anything better), we sat down to let stress levels sink, took a moment to enjoy the view and silence, talk without words and then try again. Other people would think of him as ”an unruly, stupid dog one should never bring on a vacation” but in my eyes he’s ”a normal teenager with emotions that sometimes grow too big to handle”. And quite frankly – haven’t we all been there sometime?